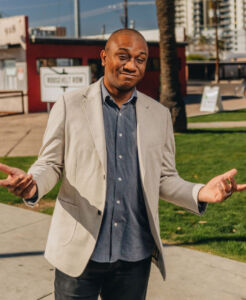 Vermon Pierre is the founding and lead pastor of Roosevelt Community Church in downtown Phoenix,  a uniquely multi-ethnic community of people based out of a historic building along Roosevelt Row. He currently serves as the president of the Roosevelt Row Community Development Corporation, which he has been a part of since 2006. Vermon is a board member of the Surge Network, a network of local churches in Arizona committed to partnering together for the good of the various peoples and communities in Arizona. Vermon is also the author of Gospel Shaped Living, which is part of the Gospel Shaped Church curriculum published by The Good Book Company and The Gospel Coalition. He and his wife Dennae live in downtown Phoenix and have 4 children.